Setting and Achieving Your Goals (With Wicca)

Imagine a world where you say that you want to do something, then you go out, and you do it. You wake up one morning and think, "I want to climb a mountain!"  And two weeks later, you're standing on the top of Mt.  Everest.

This is insane, of course.  But if you're anything like me, I have a lot of trouble getting things done.  Sometimes they just get pushed to the back burner in favor of more important or more interesting things, and other times, I lose interest in doing the activities I wanted to do.  Sometimes, I forget.  Sometimes, the option of "happiness now" instead of "happiness later" wins out.  Or, I decide that I'm not getting where I want to go, and so I abandon my goal in trying to change my method of getting there.

It's all very confusing.  But I find that most often, my goals are not accomplished because I am not focused.  I don't reach my goals because I fail to use methods that work.  Alternatively, sometimes, I fail at choosing the appropriate goal.

Of course, other songs would fall by the wayside.  I never have learned to play Stairway to Heaven -- it never really mattered to me.  I learned it once, when I was beginning.  Stairway to Heaven is one of those benchmark songs that every guitarist is expected to know.  I am clueless.  However, I love -- and therefore know -- Desperado, by the Eagles.  I can play that one over and over.  I can sing it a capella.

But the fact of the matter is that I was motivated by the love of my goal.  I'm currently in a writing class (although you certainly can't tell, with the way that I just babble on this blog).  It's an online seminar, no grades, it doesn't affect my GPA.  But I'm not taking it because I'm required -- rather, I'm taking it because I want to become a better writer.

So you have to remember, with goal setting, that sometimes, it's not you failing at the goal.  It's the goal's fault.  But what about the methods you use to reach your goals?

I tend to use the harvest allegory for my goal setting needs.  I've spoken about it on this blog a few times, but I've never fully explained what the harvest allegory is, and why it can be used to achieve previously unreachable goals.  In brief, the harvest allegory is the Wheel of the Year story, laid upon an agricultural theme, applied to your goals.  So you know how farmers plant their seeds, watch the plants grow, weed, and trim, and care for their crops, an 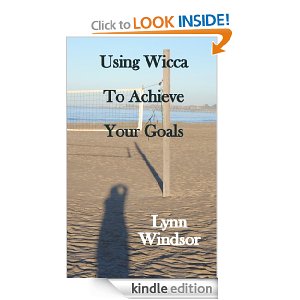 d at the end, they get to harvest?  That's what we do with the harvest allegory.  But with goals.

If you want to learn more, you're in luck.  Remember that book I was thinking about writing? Well, I didn't quite write that book, but I did write a book.  And it's about using the Wiccan Way to achieve your goals.  You can find out more about it through the image/link to the right.  The book is $2.99.  Unfortunately, most of that price goes to Amazon.  Any profits made from this book or future book sales will go directly into running this site, and hopefully, someday, migrating it to a new server.  In the coming months, I will be offering free copies of the book in contests, promos, and maybe even as payment for guest blogging.

You have Successfully Subscribed!

The WITCHYVERSE is a spirituality and lifestyle blog that's focused on helping you find the sacred in your every day life. Let us help you FIND YOUR MAGICK.

Subscribe To Our Newsletter For Your Weekly Dose Of Wonder

Join our mailing list to receive the latest news and updates from our team. You'll get new blog notifications, recipes, and more!

You have Successfully Subscribed!